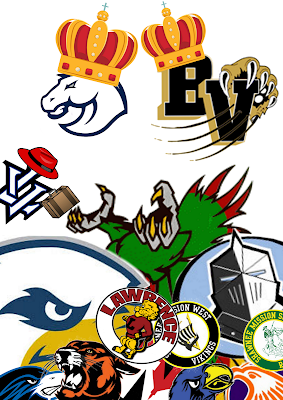 While saying the league fell into a dark pit of despair this year would be considered a stretch; it's undeniable that disappointment was the main result for each team from top to bottom. Not only did the team endure another abysmal year against the Suburban League that might deter AD's from approving such a setup in the future, but the league managed to make history by not having a single team reach the Sub-State round of the playoffs since Class 6A was formed.

The worst part is how badly the East side was whooped. The Firebirds may have been victim to the back-to-back state champs and fell valiantly in overtime, but the next two teams in the league fell in spectacularly embarrassing fashion to a couple of slightly above-average EKL teams that likely wouldn't have passed the second round of the 5A playoffs. We can at least say that one of the EKL teams won State against powerhouse Derby, showing that they weren't there by a fluke.

On top of the sub-par results to end the season, the league is also seeing the departure of three of the more respected head coaches it had to offer, with Dustin Delaney, Chip Sherman and Dirk Wedd all resigning. We'll have to see how these teams
adapt as SM East tries to maintain its momentum and Lawrence still
struggles to reach the same level of its glory days.

Olathe North - The Eagles struggled with their identity in the first half of 2017 and paid for it before finding a good combo with RB's Daymonn Sanchez and Arland Bruce IV. With both players turning along with another year in the system for QB Zac Krause, the Eagle offense should be a team to look out for next year. We'll have to see if the defense can progress, but they will be returning SS Devon Stoker and OLB Justin Earls.

Lawrence Free State - Considering how well the team did this year, it should be automatic that the Firebirds will enter 2018 with both high expectations and perhaps a good bit of urgency. RB Jax Dineen will have one more season to try and carry his team to a title game appearance and we'll have to see if the rest of the team is able to keep up.

Olathe West - Expectations aren't necessarily high as the Owls enter their first full varsity season, but the JV squad finished 7-0 while also playing Junction City in their first varsity game. While winning a state title is a little above realistic, it'll at least be fun to see both how the team performs and their somewhat terrifying mascot.

1. Lawrence Free State (10-1) - It must be frustrating for Free State fans seeing their team miss the state championship after another incredible season... but at least THIS time around, the Firebirds actually looked like the best team the league had to offer. They also get to keep their main playmaker with Jax Dineen returning for his senior year, which should prove exciting for next season.


2. Shawnee Mission East (9-2) - The loss of HC Dustin Delaney is going to hurt, both presently and perhaps for years to come. The Lancers have never been as successful in their entire history than they were under Delaney. Here's hoping his successor is able to keep up the momentum.

3. Olathe North (7-4) - You can put the Eagles getting this spot on SM East, who's miraculous 35-point loss to a team that didn't have a winning record going into the playoffs is the pinnacle of how awful the 2017 post-season was. That said, a 48-21 loss isn't much better. Both teams get this spot, but neither really deserve it.

4. Olathe East (5-5) - East came the closest to almost beating Blue Valley North, going so far as to even lead at a point. That said, the Hawks are still three years into HC Jesse Owens' tenure without a winning season, though they showed much more progress this time around.

5. Lawrence High (5-5) - A seemingly strong start to the season masked a Lawrence team that could never keep momentum flowing as they failed to string more than two wins together. The team capped off by struggling against one of the worst teams in the EKL and going from a 4-2 record to 5-5 after being dismantled by Olathe North in Dirk Wedd's final game at the helm.

6. Olathe South (4-6) - There wasn't much progress for the Falcons this year as the team got another 4-win season in the books. They'll have to find not only a replacement for QB Nick Jouret, but they will also need at least one more playmaker to help an offense that struggled to score until they faced the porous Shawnee Mission defenses.

7. SM Northwest (4-5) - This team wasn't able to escape the first round like some teams listed below them, but their three-game improvement was very nice to see. The Cougars not only crawled themselves out of the bottom two teams in the league, but added a win over an average Grandview (4-6) team.

8. Olathe Northwest (4-6) - Rounding out the Olathe schools, ONW benefited from playing a mediocre SM South team two weeks in a row. The loss of HC Chip Sherman will hurt, but aside from a 6-3 record in 2015 (best in school history), there wasn't much progress seen compared to what Northwest admins probably hoped for. The team at least returns RB/LB Andrew Dumas, who earned First-Team SFL honors.

9. SM South (3-6) - It took a lot of effort for the Raiders to crawl out of the basement with victories over rivals SM North/West, but a team with 10 Seniors listed on the roster tends to struggle regardless of effort. That said, SM South overcame the numbers issue and got a three-game improvement to provide hope for the next year of rebuilding.

10. Leavenworth (3-6) - Hey, it's Leavenworth. It's hard to believe a third season has passed since the teams first winning season in perhaps ever, but 2017's 3-6 squad came closer to that mark than either of the past two years. With the team's departure for a brand new league, the Pioneers can hope to have more success against different competition.

11. SM North (1-8) - Well, we got a big, juicy sample of life at SM North without Will Schneider and it wasn't pretty. They at least got a non-conference win over Lansing (2-7), but the team never scored more than 14-points after that victory.

12. SM West (0-9) - Trying to find positives for the last team on these lists is always difficult. The Vikings were bad out the gate and really only competed against Leavenworth and Lawrence. Outside of that, the team fell victim to blowout after blowout.

Posted by Austin Lockwood at 6:39 PM