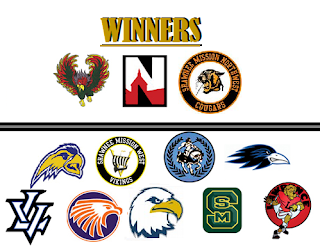 
Well, there was definitely an improvement in the Sunflower League's record against the Suburban League compared to last year, though that doesn't mean much to most fans aside from those of the Firebirds and Cougars. Each team beat Park Hill (4-1) and Grandview (1-4) respecively; with Free State scraping by with a 21-17 win, while SM Northwest had an easier time on offense, topping the Bulldogs 36-29.

However, aside from a 29-20 Indian win over 5A Lansing (1-2), no other SFL team walked away with a win. Losses ranged greatly in severity from Olathe NW's 1-point nail biter against Lee's Summit North (3-2), to Olathe North's 7-50 thrashing at the hands of Blue Springs South (1-4). At the end of the day though, the league got it's rear end torn off and handed back to itself by the Suburban teams, and the record isn't even close with the home-and-home series ending with a 2-18 tally for the Kansas side. We could go into each loss in detail, but it feels more important to discuss where each team is standing with five league games remaining on the schedule.

It's hard to belie that this is the first time the Firebirds entered Week 5 of the season undefeated since they won four straight in 2013 to start off a 9-2 season. Free State sits as the lone undefeated team left in the league with their next three games coming against opponents with a combined record of
4-8. It wouldn't be out of the question t expect a 7-0 record heading into their regular season finale against Lawrence High.

A 21-17 loss to the likes of Rockhurst (4-2
) is what could be considered right for one of the current football powerhouses of Kansas. The Lancers have only lost three regular season games since 2014, and two of them have come against the Hawklets. A rebound blowout win over Olathe North (1-3) was just what the doctor ordered as the Lancers get another seemingly easy game against SM North before taking on Lawrence (3-1) in Week 8.

The Lions survived a close one against a win-less SM West squad one week after their lone loss so far. The team's season will end with a little more challenge then the rest of the league's top half, with games against SM East (3-1) and rival Free State (5-0), who has a good chance of entering the matchup undefeated.

While a 3-2 record may not be in-line with the great Olathe East teams of the past, the Hawks have shown that they are currently the most improved team in the city of Olathe after convincing wins over  Olathe North and South. The team should consider a 4-4 record a blessing heading into the playoffs a blessing though, as they should only be favored to win their season finale against Leavenworth (2-2).

Fighting to Avoid the Big Dogs

While the Ravens have faired much better in their losses than their rival, ONW's biggest test resulted in a 29-point loss to 5A Goddard. The Eagles haven't faired well, though, as the team enters a contest against Lawrence (3-1) riding a three-game losing streak. Olathe North has one of the easier back-end schedules against three teams with a combined record of 2-10. Both teams will need to fight for every win to improve their seedings heading into the final stretch of the season.

The Olathe schools may not need to worry about facing the top seed of the 6A East thanks to a Vikings squad who's biggest accomplishment is staying within seven points of Lawrence in a 28-35 loss. Most teams want to avoid the bottom seed at all costs, but considering the team fell to 5A Leavenworth, it may not matter who they face at this point.

1. Lawrence Free State (5-0) - The Firebirds are undefeated against what turned out to be a rather lackluster schedule, but the team showed they mean business with a win over Park Hill (4-2) and they have sufficiently stomped their other competition so far. The combination of RB Jax Dineen (547 yds., 10 TD's) and QB Jordan Preston (7-1 TD:INT) has proven deadly and the team will need even more production from them against the 6A West teams.

2. Shawnee Mission East (3-1) - The Lancers were a couple plays and potentially a fumble away from beating one of the most storied high school programs in the region. Outside of the one blemishon their record, the team is continuing to steam roll through the league and won't face a real test until Lawrence in Week 6. RB Milton Braach II has been as effective as ever, averaging 129.8 yards in a game with seven touchdowns.

3. Lawrence High (3-1) - Very few were spared by Week 3's throttling at the hands of the Suburban League. It really feels like a strangely dull start to the season, as the league's top three teams won't see each other until Lawrence faces both SM East and Free State respectively.

4. Olathe East (3-2) - Out of all of the Olathe Schools, Olathe East seems to have been the only one to truly bounce back after a terrible year for the city in general. A 5-3 record isn't exactly the best stretch goal a team would like, but Olathe East shouldn't be choosey heading into the playoffs.

5. Shawnee Mission South (2-3) - The drop off between the top four teams of the league seems pretty steep. The Raiders have already improving infinitely more compared to last year; but aside from a 35-7 win against what was thought to be a decent Leavenworth squad, it still feels too hopeful to expect a sweep of their last three opponents for a winning record.

6. Leavenworth (2-2) - Dreadful showings against North KC (1-5) and #5 SM South keep the Pioneers down. However, wins have apparently been hard to come by for the league and Leavenworth has two, depending on their seed, a decent playoff run still isn't off the table.

7. Olathe South (1-4) - Disregarding the playoff's first round, Olathe South became the one of the first two teams to exit the running for a winning record after an offensive trainwreck of a loss to Free State. It certainly hasn't been easy for the Falcons, who have already played the three of the Top 4 teams in the league. It won't get any easier with a match-up with Lawrence approaching over the horizon.

8. Olathe Northwest (1-3) - Out of all the one-win teams, Olathe Northwest may have been the closest to a 3-1 record. The Ravens were a single point away from beating their Suburban League opponent, which was a lot better than some may have hoped for.

9.  Olathe North (1-3) - As usual for the lower third of the league, there isn't much to talk about besides which lone win is more impressive or how bad the losses are. Olathe North may still have a chance at a winning record, but starting QB Mason Myers was brought in against SM East and the absence of starter Zac Krause was certainly felt.

10. Shawnee Mission North (1-4) - While averaging a flat 21 points a game isn't a sign of the worst offense ever, SM North has given up an average of 38 points. That is just not acceptable if a team wants to win games and the offense is definitely missing Will Schneider despite the efforts of his successor Dustin McKessor (436 yds., 7-4 TD:INT), who was overall impressive against Lawrence and Lansing.

11. Shawnee Mission Northwest (1-3) - The Cougars may have been one of just two winners against the Suburban League, but every other game has been a true disaster. Giving up 40 points on average while only scoring an average of 15 is a recipe for bad times as the Cougars try to regroup for the fight to avoid the top seeds of the playoffs.

12. Shawnee Mission West (0-4) - You can't avoid the bottom of the list if you don't win and the Vikings have not done that so far. With the way things are looking, it may not happen at all this year.

Posted by Austin Lockwood at 7:13 PM