I'll be taking a note from ESPN's Big XII team and talk about the games that I think will highlight each week and which ones will be the best to attend! This list will be based on the teams playing, the stadium, the possible implications of the game, and of course how rowdy and exciting the atmosphere will be! Of course, these games will be based on my pre-season thoughts on each team so the best games for each week might change as time moves forward.

NOTE: I will try to avoid adding venues outside of the Sunflower League unless a game truly becomes a can't miss situation. That means no Garden City, Blue Valley, or other schools of the sort. 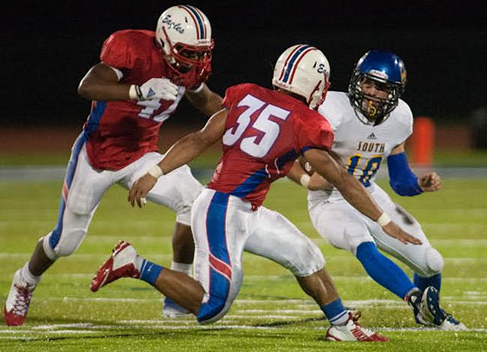 This game wraps up an awesome three-week span of Olathe North games and what better way to round it out than the original O-Town rivalry ? The Eagles and Falcons don't like Olathe East. They don't like Olathe Northwest either. But these teams absolutely hate each other on the field. These teams wait all year for this game and last year's double overtime win for Olathe North was perfect proof.

Both teams played really well in the regular season and I wouldn't doubt that they will repeat again. It wouldn't be far-fetched to say that both teams could enter the game 2-0 and a win for either team would be huge.

The rest of the league could be interesting with teams like SM North and Northwest getting real challenges. That said, I thought about it for awhile and I couldn't find one that especially stuck out like the other two games in this post.

I finally decided that the week's Thursday night would give people a good chance to see how both the Hawks and Raiders have improved after lackluster seasons last year. For those with open schedules on Thursdays and Fridays, that also means watching two games in one week is possible. I don't think any Sunflower League fan could be disappointed with that. 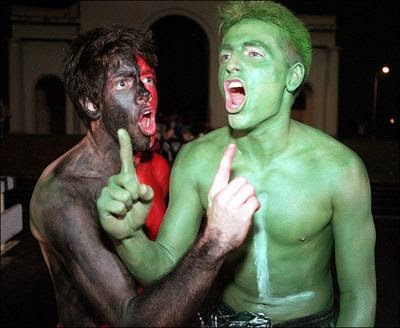 This rivalry may not be as long as The Hula Bowl, but I would bet everybody and their mother in the metro knows about this rivalry. I don't think much explanation is necessary, but here's the basics.

1. Lawrence is the only town in the Sunflower League with two high schools. That alone means that players mainly have a choice between Free State and Lawrence High. You don't have to focus on three or four other schools in your city like the Olathe and Shawnee schools do. I'm not saying they don't have clear rivals, but there is definitely a big difference when you mainly share athletes with a single school across town.

2. These teams should be great this year. Not just good like their 6-3 (Free State) and 5-4 (Lawrence) records from last season. Both teams are chock full of talent again and some believe we could potentially see a rematch at the state championship. I'm not personally in that boat but it should still be an indicator of how good these teams could really be. The Hula Bowl in recent history has just been about pride as both teams are in heavy slumps. LFS vs. LHS is a game that almost always means something.

﻿﻿﻿﻿﻿﻿3. This is kind of going back to reason #1 but it warrants its own bullet. The fans are awesome at this game almost every  year from what I hear. Free State fans are rowdy when they play Olathe North and Lawrence High fans can hold their own as well. I can only imagine what they are like against each other. It goes without saying that playing in the same city helps fans with travel as well.
﻿﻿﻿