A few years ago, Eli of the Sunflower League Football Blog made a post talking about the team uniforms and which ones were the best. A lot has changed since then and I think it is a good topic to discuss as many teams have new uniforms while others have tried to stick to the classics.

The best thing about football uniforms is that a team can look completely different just because they are playing away. Yes, pretty much all other sports have away uniforms, but with football you can really be creative with your style and still let people know who is playing by just looking at the uniforms.

Since home and away uniforms can vary so greatly and because some teams have really nice uniforms for one type but fail to deliver the same punch in the other; I will make two separate lists. Let's begin with the home uniforms! 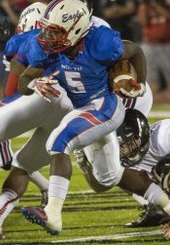 I admit the blue version of the home uniform has grown on me. I will also say that this uniform is STILL not as good as the old Reeboks from the year before and I would be shocked if anybody disagreed with me on that. I still like the color scheme and the helmet is the one thing that should never change just like Lawrence or SM West.

The helmet is by far the greatest part of this outfit but I will say that the blue jersey holds it's own. The biggest problem are the numbers which I despise. The single digits are okay but for big guys with big chests and the double digits... how about no. Perhaps I just haven't moved on yet but that's just how I see it. A big positive for me is the fact that the front of the jersey still says "North".

The pants are a lot better as I really like how they flow with the new shade of blue used in the jersey. I miss the old red-blue stripe but these that's more because of nostalgia. These pants are eye catching and I especially like the "Eagles" on the left thigh. It's not new but I think it looks nice.

I still think this is one of the better uniforms in the league, but if there's ever a vote to change back to Reebok or the even older Nikes, you can be sure on which side I'm choosing. The uniform is good overall but the numbers create a weird flow and hold the entire outfit back. 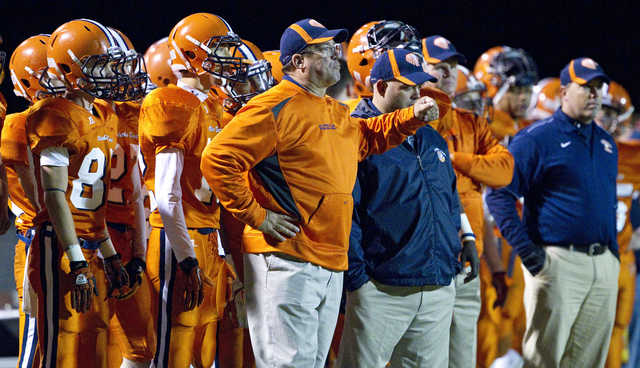 I'm not sure when they last used the all-orange outfit, but I actually LOVE that version. Some could say it is literally a sea of orange. However, I think the fact that it's orange is what makes it stick out the most. I mean hell, it's better than most of this league where the poppiest uniforms color-wise are Olathe North and SM West (who uses mostly black for their uniforms anyways).

I can see why others would hate this uniform. That said, I like it simply because it brings some variety to the playing field. That's about all there is to say. Besides that, I just think orange is a good color to use for an entire uniform compared to oh I don't know... dark green. It's okay to be all green, but not that green.

I wasn't really a big fan of the prior uniform for the Ravens. It didn't really do anything wrong, but I just never felt like it really popped as much as this updated version. I keep it here at #3 mainly because I think the blue should be a little darker.

That may sound like a gripe, but I think  it's way too close to Olathe South's shade of blue. With that said, this uniform still looks nice with the black jersey which is slowly becoming a more accepted color in my mind. I used to think of black jerseys as boring before seeing ONW's take on the color.

The Ravens have a very solid uniform that makes great use of a difficult color palette. The uniform is very appeasing to the eyes but the helmet color tends to obscure and overwhelm the Raven logo. I hear that they will further take notes from Oregon and switch to wings on the helmet sides for next year. That will definitely help this uniform come together.

There are classic high school uniforms, and then there's Lawrence High classic. I actually prefer the all-red uniform (below) but the white pants still looks rather nice.

I mainly don't have this at the top because while it is indeed a classic and a throwback to the old days of football, it's rather bland compared to other uniforms today. The black lines down the side of the white pants look out of place to me. The uniform would come together a lot more nicely with either two red lines or just removing the black lines all together.

The uniform should never be changed as it truly is a classic. However, being a classic is far from being perfect. The Lions have a great home uniform but sometimes newer versions can be better. I am one of the people that think we need to explore more options in terms of how teams present themselves visually. Also, this is another example of how you do the mono-color jersey and pants look right. 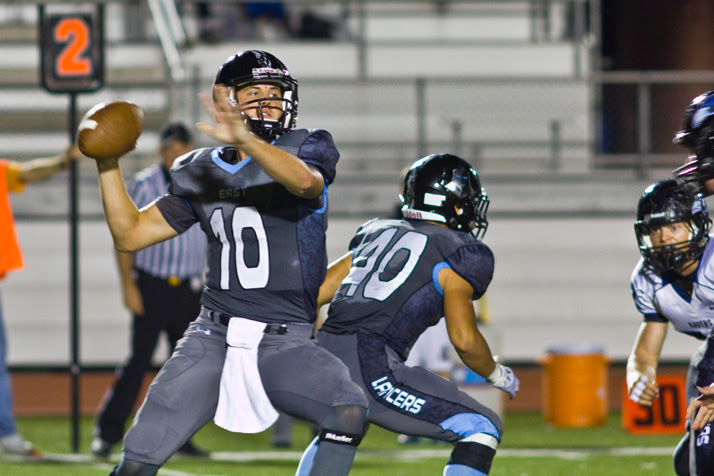 From what I understand, there are a few variants to the Lancers' home uniform. My personal favorite is the the black-grey-grey version shown to the right. I just love how well this outfit comes together. The two different shades of grey for the jersey and pants is slightly strange, but it still feels natural to me. The new helmet design looks absolutely stellar as well.

The mix of powder blue, grey, and black creates a very professional looking outfit overall. My one gripe is the the numbers and lettering. I think something a little sharper would look amazing. Despite that, this is an incredible outfit that I hope becomes the usual if it isn't already. (Most photos I see have the Lancers wearing black pants and I just don't like it as much.)

Side Note:
- If anybody can let us know what sponsor made the Olathe North uniforms, it would be greatly appreciated.
Posted by Austin Lockwood at 9:15 PM